An evening of new plays directed by our 2019-2020 Directing Fellows, featuring:

Runtime is approximately 2 hours followed by drinks and snacks in the Clubbed Thumb office.

MORE ON THE PROGRAM:
In partnership with Playwrights Horizons Theater School, The Clubbed Thumb Directing Fellowship is a five-month new play directing intensive, under the mentorship of alumni artist Anne Kauffman and directors Daniel Aukin and Adam Greenfield.

Fellows develop new 30 to 40 minute plays by commissioned Clubbed Thumb playwrights over the course of a semester with Playwrights Horizons Theater School student and alumni performers, in barebones, classroom settings. Then, they build on this work with workshop productions of the same plays with professional actors, presented for industry audiences at Winterworks. 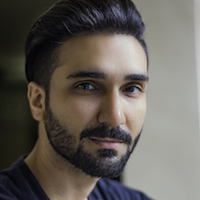 ANDRÉS LÓPEZ-ALICEA is a Puerto Rican director, actor, and teaching artist based in New York. He graduated from The New School for Drama with a degree in MFA Directing. His early studies were at the University of Puerto Rico with a degree in both Architecture and Drama. During his studies, Andrés was recognized by the university with awards in both directing and set design. In 2010, he created his own production company, Arte Zanquia’o, where he directed, produced, and acted in a variety of performances that ranged from improv shows to original works. In New York, he joined the creative team of Teatro LATEA, where he opened a resident theater company called Teatro 220. As an Assistant Director, he has worked with Alexander Mikhail on Twelfth Night, Laura Savia on Artney Jackson at Williamstown Theatre Festival and Christopher Liam Moore on Hairspray The Musical at Oregon Shakespeare Festival. Selected credits include: Cymbeline (The New School for Drama), Pony Up (The New School for Drama), Blood Wedding (The New School for Drama), Five Sessions (LATEA Theatre) and Bad Press (The Cherry Lane Theatre.)

EMMA MILLER is a director, educator & producer. She is Co-Artistic Director of The Hearth, with which she recently directed Gracie Gardner’s Athena (NYTimes Critics’ Pick, JACK). Emma’s work has been seen at JACK, Queens Theater, The Medicine Show, The Tank, Dixon Place, Lucid Body House, Cincinnati Fringe, South Oxford Space, Theaterlab, Playwrights Downtown, Kenyon College & more. Emma was a Fellow at Playwrights Horizons, is Theater Arts Director at B’nai Jeshurun, and is on faculty at the Eugene O’Neill Theater Center. Emma is an alumna of Laurel School, Kenyon College and the National Theater Institute – Advanced Directing at The O’Neill.

CAITLIN SULLIVAN is a New York-based director and theater maker. Her recent work has been presented by Ars Nova, New Georges, New Ohio Theatre, WP Theater, Danspace, Fusebox Festival, the Drama League, On the Boards and Seattle Repertory Theatre. She is the Associate Director of Hundred Days and The Lucky Ones (The Bengsons and Sarah Gancher, dir. Anne Kauffman). Before moving to New York, Caitlin co-founded Seattle’s critically acclaimed Satori Group, where she created and/or directed seven original works. She spent several summers as the Artistic Director of the Williams College Summer Theatre Lab, developing new plays and musicals with The Bengsons, Martyna Majok, Mallery Avidon, Dipika Guha, and Caroline McGraw among others. Born and raised in Boston (Dorchester!), MA, Caitlin is a graduate of Williams College, an alum of the Drama League Directors Project and Next Stage Artist Residency, a member of the New Georges Jam and a New Georges Affiliate Artist.

Applications for the 2020/2021 Fellowship are now open – click HERE to apply!